Onee Chanbara Origin is a retelling and rebuild of the original PS2 classics The OneeChanbara 1 and The OneeChanbara 2 bundled into one game. Despite being two stories rolled into one, it barely manages to come together as a single story. Both the first and second game have been rolled into one continuous experience, allowing you to switch between Aya and Saki as you take on each stage. You’re given 10 to 15 seconds of exposition at the beginning of each stage which gives a very general idea about why you are where you are.

I found myself trying to fill in the gaps in narrative myself for the first few hours before I realized that the exposition doesn’t get any better as you progress. Small pieces of information are given through dialogue during combat but are easily lost in the moment. Any information that it does offer only gives insight into the characters themselves rather than the world they inhabit.

What in the world happened?

Admittedly, the background and context of the story of Onee Chanbara Origin is fairly interesting. Unfortunately, there’s barely any mention about why or how the undead took over, and with only five characters in total, the world feels empty and inconsequential. Your cursed bloodline, known as Baneful Bloodline, is fairly interesting in that it brings a dramatic change to your character’s appearance and operates with pseudo-vampiric logic. Basically, if you get fully covered in blood, you get powers.

Some scenes from the original OneeChanbara games were shortened or removed for the rebuild. Pivotal moments in the story are missing motivation like they were hamfistedly thrown together between meetings about getting the boob jiggle right. Despite the story, there is a lot of fun to be had by viciously attacking or expertly dodging and parrying your way through, sending limbs and viscera flying all the while. A quick look at the game will tell you that it doesn’t take itself too seriously, and scantily-clad, action-filled combat is what the game is all about.

Let’s get down to the hacky-slashy

Combat in Onee Chanbara Origin is extremely simple and doesn’t offer much beyond your usual hack and slash title. You have a basic attack, a stun attack, and two special attacks depending on the weapon you use. Finally, you have parries which help to greatly increase your enemies stun gauge and a completely spammable dodge. You can switch between your main weapon and a sub-weapon which slightly varies the attacks and stuns you use and allows you to perform different combos. Honestly, the entire game can be played by spamming the basic attack and the dodge buttons because the combos don’t require much thought or practice.

Each hit and kill will add to your Stain Guage which, once full, will send your character into Berserk Mode, increasing your attack power and speed but reducing your defence. Keep the slaughter going long enough, and you will enter Xstatic Mode, which boosts your stats like in Berserk mode but it also consistently drains your health. It is really quite difficult to manage your Stain Guage because once it’s full, you’re entering Berserk mode with no player input. This means it often kicks in near the end of fights with common enemies that really waste all the blood you’ve built up.

Each chapter is done in stages which last between 5 and 10 minutes each but honestly feel like so much longer. Basic grunts won’t cause you any particular challenge beyond crowding you. There’s very little in the way of a challenge in the game. Boss fights last around 3 minutes each and are generally very disconnected from the story other than the fact that they’re zombies. The background textures of almost every stage are awful. With some exceptions, the vast majority of the game is spent in grey, blurry corridors that offer nothing more than barriers to guide from A to B.

While the games and media haven’t had much success in the West, it still boasts a strong cult following. Since the game is a complete rebuild of classic PS2 OneeChanbara games, you would expect there to be more attention to detail and care shown in the graphics outside of just fan-pleasing character design. Cel-shading does help to modernize the game and fits the anime style very well, but it still wouldn’t look out of place as a PS3 title. It’s clear that the vast majority of the design process was spent on the character design, and most of that time was spent getting the boob jiggle right.

Outside of these body parts though, there’s very little imagination to show. Your weapons are fairly basic, and clothing is either underwear with a hat or the usual Japanese school uniform. 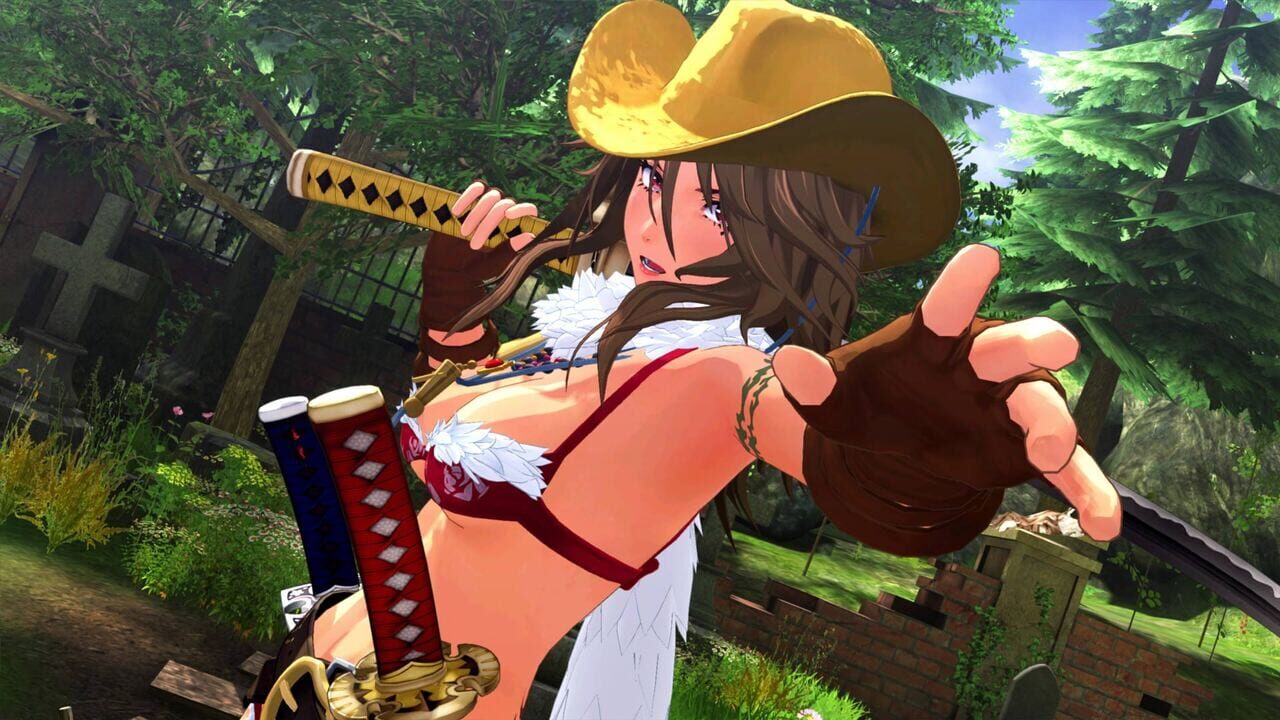 What about the bad guys?

As for the enemies you face, there is little to no variation between them. Most of the undead are mottled, green-ish figures with a little gore added. Beyond that, enemy animations and attack patterns are fairly standard and offer little to help the visuals, mostly because each attack you make is followed by some light-up effects that take most of the focus away. This is actually a very welcome dose of colour and movement to an otherwise grey and dead setting, but a lack of variation gets stale pretty quickly.

The swords are longer than the story

Onee Chanbara Origin has 25 chapters, each lasting less than ten minutes and boss battles can be finished in a matter of minutes. Even when I was feeling immersed and drawn in, it felt like a slog. The level layout is extremely linear and predictable. It all just feels like a game we’ve played a hundred times over, on a much older console.

While I appreciate the focus isn’t so much on horror as it is on campy fun, there are zero elements of horror despite the undead setting. All in all, you can complete the story on Normal in about 5 hours. You can return for harder modes, or you can enter Survival Mode once you’ve completed the game which will unlock an extra playable character. For me, though, I can see that once through the story is more than enough.

Maybe if you are more familiar with the series -or prefer mindless murder combos and grinding- Onee Chanbara Origin’s length will work for you. For anyone else though, the €49.99 price tag is egregious. If you use the harder modes and survival, you can probably stretch out the length of gameplay, but with all features considered, you’re still getting less than 20 hours content for €49.99.

Costumes are around €3 each, and new levels are more expensive but don’t offer any dramatic changes from the base game. For a price like that, I would expect a lot more. Considering the strong cult following that was built from previous OneeChanbara titles, the lazy design and the fact it’s the 15th anniversary of the series, it really seems as though this game was just designed to drain their fans’ wallets rather than honouring a long-standing series.

I promise we’re nice! Keep up with our streams over on Twitch (GamEir) and our videos on YouTube (GamEir) and we’ll give you all the latest content