Developer Aerosoft has a long list of simulation games on PC and has now brought truck simulation to consoles with On the Road: Truck Simulator. While consoles have a pretty spotty history with reliability in simulation games, On the Road does a good job of providing exactly what’s promised. While there’s nothing ground-breaking on offer here, it’s a stable and moderately detailed game that should fit well with any simulation fan’s collection.

On the Road does exactly what it says on the box and not much more. It’s a decent simulator and a solid choice if you are looking to play something simple to play to kill some time or wind down. Don’t count on it to grip you for very long though. From the beginning, the experience is underwhelming. You’re given a quick menu that lets you set up your driver profile and your business. You manage on your own from there.

You select a number of available jobs with the goal of growing your business, your number of trucks and trailers and your funds. Time management is an important factor and will determine your pay at the end of the delivery, as well as any penalties accrued along the way from missing deadlines or damaging goods. You need to plan your routes to manage multiples pickups and dropoffs, stop for rest and to refuel. What’s impressive is that you also need to drive well, otherwise you can get speeding tickets that affect your funds and your reputation. Passing red lights will also get you a nice little photo of your vehicle committing the crime.

The controls are a little difficult to work out at first and don’t seem like they’re designed for a D-pad controller. Even starting your truck is a multi-step process that won’t work until you figure out the card system settings. Steering is difficult even on lower settings, and it’s all too easy to lose control and damage your goods with a trigger accelerator. Oddly, your truck doesn’t feel like it has much weight on the road, even with a large load. Sensitivity can be adjusted to make it easier but you still seem to be driving on black ice at all times. 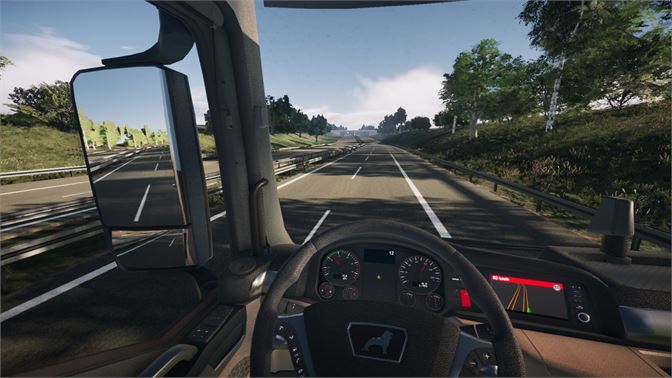 Damage isn’t much of a problem when you have no goods as there’s no change to your vehicle and no impact on the environment, so it’s hard to go beyond the confines of logistics when you’re looking to add a little fun to your delivery. Players with a racing wheel may get a better experience out of On the Road but a PS4 controller is definitely not optimal.

The game is very much a single channel experience in that it is purely a driving simulator. There’s very little outside of driving for thousands of kilometres to keep you engaged. Lifeless cities, empty buildings and driverless cars pull you out of any immersive state you might have reached. Long stretches of German highway do have a nice feel to them and can be pretty relaxing to drive through but needing to stop for rest, fuel or to load/unload takes players right back to reality because, by the looks of things, you’re the only human left on planet Earth. You can hop out of your truck to open your trailer doors and refuel but this mostly feels like a chore to do for a small sense of realism.

While there’s a large area of Germany to drive through, there’s very little to look at other than long stretches of motorway ahead of you. The game has some nice city settings which help to break up the monotony of driving past empty cars and poorly textured trees with 2D foliage. The game features a performance warning simply for having your truck rearview mirrors on instead of just being a rectangular grey smear, which shows the strength of the build on console versions.

Your render distance is far too close as trees and cars appear and disappear into a large white mist that follows your every move. When travelling at high speeds this is especially bad as cars pop into existence a couple of feet into the air before falling onto the highway and joining the road.

All the fun of the German motorways

The trucks themselves are the most detailed and aesthetic aspect of the graphics, with multiple makes and models to choose from. The cabin of each truck is the most detailed area in the game, and I have to admit that it looks great inside. Everything outside of that however needs a lot more work, given that there’s nothing to do but look at the surroundings.

On the Road or On the Shelf?

As you’d expect from a simulator, there’s no clear ending so you can take all the time it needs to get your money’s worth. If you can make it far enough to start building your business, you can start buying additional vehicles and hire drivers for those vehicles. From there, the game just repeats until you have a complex system of jobs going as you keep the high-end trucks for your own drives.

Beyond that, On the Road leaves it up to you to find enjoyment. Eventually, driving from company to company and selecting routes for your drivers loses its appeal. If you make the mistake of going off-road, invisible walls and kilometres long railings along the autobahn will block your way. Couple that with indestructible trees and you will soon find there’s not much point in leaving the road. Vehicle controls are clunky but there is some enjoyment to be taken from stopping for red lights and indicating when needed or needlessly flashing headlights or the horn at other drivers. Once those lose their draw, you can consider this the end of the game.

For €30.00 on Playstation and Xbox, and €25.00 on Steam, On the Road is better left for people who want a dry and serious driving experience rather than someone looking to blow off a little steam.

I promise we’re nice! Keep up with our streams over on Twitch (GamEir) and our videos on YouTube (GamEir) and we’ll give you all the latest content.